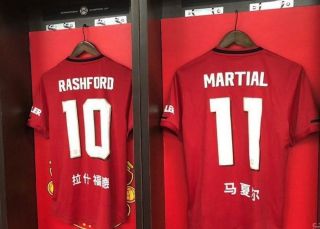 So the club, with help from the kitman, has decided to put the names of each player on the back of the shirts in England and Chinese.

A nice touch to honour the host nation for today’s pre-season friendly in the International Champions Cup (ICC).

The fans from China will appreciate this, and it may even become a thing in stores where United sell merchandise in Asia.

See a picture from inside United’s dressing room below:

Nice touch by #mufc to have all the player names in Chinese as well as English 🙌🇾🇪 pic.twitter.com/vAMrAO0o4d