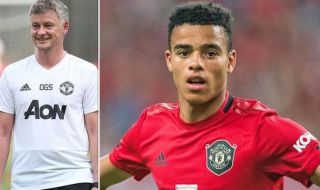 Manchester United are preparing a new bumper deal for youngster Mason Greenwood, according to The Sun.

The 17-year-old has impressed Ole Gunnar Solskjaer so far during their pre-season tour, with the boss suggesting he might play Greenwood against Chelsea in United’s Premier League opener.

He has already scored twice this month – against Leeds United and Inter Milan – and now there’s talk about whether he is ready for a regular role in the first-team.

But news has emerged that Greenwood is already in talks over a new deal at the club.

READ MORE: ‘Could this be a bluff?’ Reporter doesn’t think Man Utd have stepped away from Bruno Fernandes deal

In their report, The Sun make it out that Greenwood’s current deal sees him earn peanuts, when it’s without question significantly more than what the journalist who penned the piece earns…

Greenwood signed his first professional contract last October, but his growth since then is likely to see him earn a bigger and better contract soon.

A source told The Sun: “He isn’t on an awful lot but does get bonuses on top for each appearance.

“Ole wants him to focus on his football at the moment and he is doing a terrific job of that.”

This could be a Greenwood’s breakthrough season, with United already concerned enough to give him another contract so shortly after handing him one.