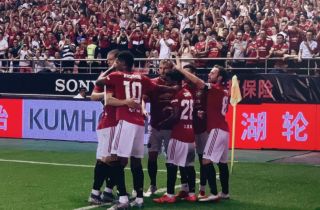 Manchester United made it four wins from four on their pre-season tour with a 2-1 win over Tottenham Hotspur in Shanghai.

The Reds didn’t really know what to expect going into game, but Ole Gunnar Solskjaer’s stuck to their plans and won their fourth consecutive game.

Conditions were extremely humid, but United never really looked like giving in against last season’s Champions League finalists, who they will be expected to challenge with domestically in the upcoming campaign.

Anthony Martial had a great chance just four minutes into the game and hit the post, but he found some space inside the Spurs box again after the 20-minute mark and made sure to take advantage of the situation.

Spurs stand-in goalkeeper Paulo Gazzaniga should have done better to prevent the goal, as he was beaten at his near post.

See below as United fans react to another positive result on the 2019 tour:

Much better to watch.

Gomes showing what he can do in and around the box. Brilliant play to score that goal.

To be fair, we have performed more or less brilliantly in all the pre seasons bar the Moyes one. Its just the league that does us in. Hopefully this time they justify the pre season results. But the squad looks incomplete. CB, CM, RW still needed.

Time to get behind ole whilst he implements his style and puts together his team. #Mufc

McTominay bossed the midfield for us first half. Wan Bissaka unstoppable again. Dan James first team worthy. Great finish by Martial with a great pass by Andreas. Second half was sloppy but good pass and go play by Mata and Gomes to get the goal

Andreas good no.10 backup. Can try things there and not get punished like he did when he was deeper. Would start him over Lingard

Tidy passing and decent shape. Players look sharp and fit. Have to keep in mind it’s only a preseason friendly but a lot of positives to take from it