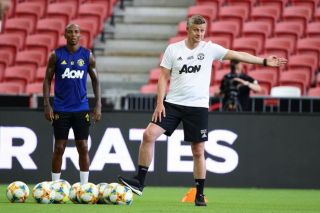 A number of Manchester United fans jumped to Twitter to react to the Ole Gunnar Solskjaer’s starting eleven to face Tottenham Hotspur in the next match of the 2019 Premier League tour.

There is a lot of excitement surrounding Mason Greenwood getting the nod against Mauricio Pochettino’s side, but that quickly fades away when you look at the defence.

Chris Smalling and Marcos Rojo start at centre-back while the full-back positions are filled by Aaron Wan-Bissaka and Ashley Young.

New signing Wan-Bissaka has been terrific on tour, and is seen as the only positive inclusion from the above four.

Young was subject to booing by United fans in the last outing against Inter Milan, despite the Red Devils winning the game 1-0.

When it comes to Smalling and Rojo, it’s no wonder fans are desperate to see United sign a top centre-back this summer, with plenty of speculation surrounding Leicester City defender Harry Maguire.

Check out the tweets below as United fans react to the questionable back four about to face Spurs:

I’m guessing the plan is to lose this cup

They backline is fucking tragic #GlazersOut

Why mix it half superstars and half deadwood first time we play a challenge?

Oh well AWB can run that defence on his own.

That may be the worst backline ive ever seen #glazersout

That may be the worst backline ive ever seen #glazersout