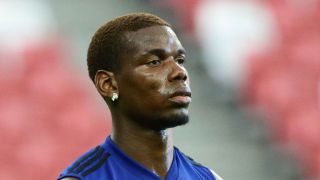 The French midfielder has been linked to Real Madrid all summer, and has even said it would be a ‘dream’ to play under Zinedine Zidane at the Santiago Bernabeu.

That’s not what you want to hear from your star player when a new manager has been appointed with the task of taking United from mediocrity to the top again. Ole Gunnar Solskjaer needs a squad of players who are willing to fight for him and the badge rather than flirt with the prospect of joining Real Madrid when still under contract.

But Mr. Palmeri has thrown a familiar name into the fold.

Lazio’s Sergej Milinkovic-Savic was constantly linked with a switch to Old Trafford last summer but remained at the Stadio Olimpico.

It is now being reported that United have agreed personal terms with the Serb — which should see SMS earn €6m net per year, as tweeted by Palmeri below:

Manchester United are indeed preparing the way out for Pogba.
Meeting with Milinkovic-Savic agent, agreement on personal terms should be on 6m€ net per year.
Up to Real Madrid offer now…

Where does this leave talk of United going for Sporting ace Bruno Fernandes?