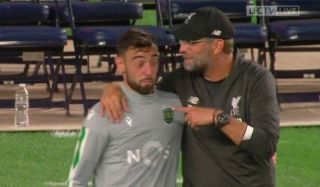 Fernandes scored and assisted against Liverpool, and he was seen chatting with Klopp after the match.

The Portuguese ace had a terrific 2018/19 season too, scoring 32 goals and providing 18 assists in 53 appearances across all competitions, so it was nothing out of the ordinary for him to give Sporting’s opponents a hard time.

As quoted by the Liverpool Echo, Klopp said: “If he will do that [join United] then we will face him. He’s obviously a really good player. They have already a few really good players, so that will probably make them stronger. It’s not nice, but it is not our cup of tea, to be honest.”

His performance on Wednesday night is bound to be a topic of conversation for United fans, who will now look at the calendar to see the club are running out of time to get a deal done. It will likely irritate Liverpool fans who are pining after a marquee signing during this transfer window – after winning the Champions League and setting their sights on the Premier League for the upcoming campaign.

The rumours surrounding United’s attempts to sign Fernandes continue to go on, but the question is are we any close to announcing him as our latest addition?

Fernandes looks a terrific player, one that would make our midfield a lot better.

After losing Ander Herrera on a free transfer this summer, it would be a joke to go into the new season without a new midfield signing. Newcastle youngster Sean Longstaff has been linked with a move to Old Trafford, as per Manchester Evening News, but he only has 9 Premier League appearances under his belt and could go anyway in terms of development.

This is a player that would start for United – and we also have Fred who needs to prove his worth this season, so it could all work out in Solskjaer’s favour.

It would be a kick in the teeth if the club turned around to Solskjaer and were unwilling to get at least two more signings in before the deadline. He needs the backing!