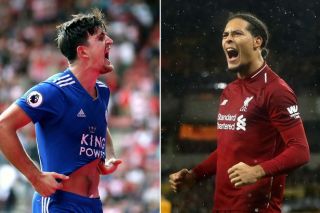 Former England boss Sam Allardyce thinks that Harry Maguire could be to Manchester United what Virgil van Dijk has been to Liverpool.

Quite the statement considering claims last season by some who were prematurely of the belief that Van Dijk is the greatest defender to have played in the Premier League.

He’s not the greatest but if Maguire can come in and have a similar influence that Van Dijk has at Liverpool, we will all be very happy with a much improved defence.

Maguire has a priority signing for United this summer and the Express claims that the 26-year-old England international will talk with the Red Devils about a transfer from Leicester City, although a report from the Telegraph says the Foxes are demanding £90m for Maguire.

Allardyce has compared Maguire to Van Dijk and feels the former would reach a new level at Old Trafford.

He said: “He’s worth around £70m-£75m. He’s similar to Van Dijk. Van Dijk is better since joining Liverpool and Maguire would go to another level if he moves to United.”

“Van Dijk is better since joining #LFC and Maguire would go to another level if he moves to United.” ⬆️