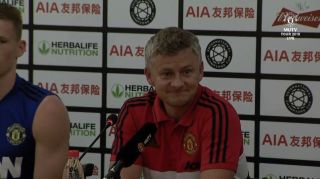 Ole Gunnar Solskjaer has provided an injury update on two players ahead of Manchester United’s next pre-season friendly against Tottenham Hotspur tomorrow.

In his pre-match press conference in Shanghai, Solskjaer revealed that Victor Lindelof is back in contention to face our Premier League rivals, but Romelu Lukaku is still unavailable.

“Lindelof is fine but Lukaku won’t be fit, no,” Solskjaer confirmed, as per ManUtd.com.

“He ]Lukaku] has been working with the physios the last few days. I don’t think he’ll make this one either.”

Lindelof came off early in the second half during the 1-0 win over Inter Milan on Saturday, but has trained with the rest of the squad since then.

Lukaku hasn’t played a minute of football on tour – making his involvement, or presence even, all the more pointless.

“He got injured in training, so he had to stay here,” the boss added. “If it was worse, we would have sent him home, but he’s been working with the physios in the gym and stuff, so no [I do not regret bringing him here.”

But how worse could it have been?

Lukaku has been on tour with everyone since the beginning, when the squad left Manchester for Perth. He’s not kicked on a ball in any of the friendlies, sat out training and has been constantly linked with a move away from the club.

That’s not the sort of player you want around when you’re trying to prepare for a new season – after finishing sixth in the previous campaign and losing out on Champions League football.