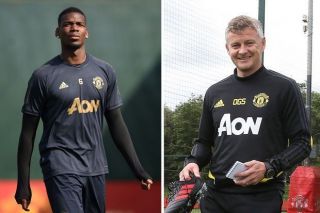 United’s £89m record signing has only himself to blame after issuing a series of ‘come and get me’ pleas to the Spanish giants.

He described the prospect of playing for Zinedine Zidane at the Bernabeu as a ‘dream’ (via BBC Sport) as well as admitting it may be time for a new challenge (via The Guardian), in separate interviews since the turn of the year.

United fans, like fans of other clubs, are bound to react badly when players fail to commit themselves fully to the club, as seen in the past with Wayne Rooney and Rio Ferdinand.

Then you look at Ashley Young getting booed when United beat Inter Milan in Singapore last week. A player whose commitment to the club has never come under questioning.

Young is 34-years-old and in decline, but no way does he deserve that level of abuse. It was totally uncalled for.

But Solskjaer was asked about Pogba, and has been quoted by The Mirror: “I think our fans know what Paul has given the club and what he can give us.

“Of course, there are some loud fans – but it is a small minority.

“And Paul has been an absolutely top individual – and me and the players would testify to that.

“He has never been a problem for even a second here and we’re just grateful he performs as well as he does.”

Romelu Lukaku is another player reportedly looking to leave Old Trafford before the transfer window shuts. He’s not played a minute of football on tour, with Solskjaer suggesting he picked up an injury in training.