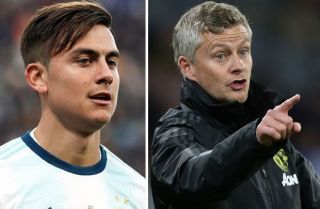 Paulo Dybala future at Juventus is up in the air at the moment.

The Argentine will have no shortage of offers and is said to be weighing up his potential options as he ponders a move away from Italy after being overshadowed at the Allianz Stadium following the arrival of Cristiano Ronaldo last year.

Manchester United are among the clubs linked to Dybala, along with Paris Saint-Germain (via CalcioMercato).

However, it seems PSG and ourselves get linked with any big name footballer trying to engineer a move away from one club to another.

But United haven’t exactly thrown money around this summer and strengthened like many hoped.

Solskjaer has so far made two signings — Daniel James from Swansea City and Aaron Wan-Bissaka from Crystal Palace.

The latest coming from Italian newspaper Tuttosport claims the 25-year-old ‘would not reject’ a move to Old Trafford, due to concerns over how much game time he will receive under Maurizio Sarri.

Tuttosport also claim a possibility has opened up for United midfielder Paul Pogba to return to Turin.

The Daily Star, citing the reports from Italy, suggests a swap deal could take place in the coming weeks because Juventus haven’t got the funds to sign Pogba directly – though, that’s not United’s problem and the club has yet to show signs they’re willing to give up on the French star for Dybala.

Moreover, it states that Juve would accept a bid of around €100m for their Argentine playmaker.

Speaking to the press earlier today, Solskjaer interestingly admitted he will not get frustrated if the Old Trafford hierarchy cannot land his top targets.

“My job is of course to manage the circumstances and the squad that I’ve got,” Manchester Evening NewsOle said, as quoted by .

“But people will tell you I’m not angry for very long.

“The players know when I am angry but we get it sorted and move on and I’m the same with my kids.

“Of course I have my targets – but I won’t bear grudges if I don’t get them.”