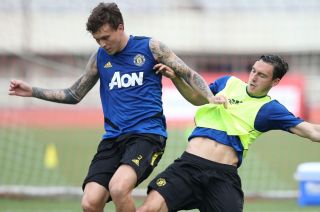 Manchester United take on Champions League finalists Tottenham Hotspur in an all-Premier League clash in the next set of matches in the International Champions Cup on Thursday.

Spurs (3rd) finished ahead of United (6th) in the Premier League last season, and we’ll be hoping to bridge that gap as well as others when Ole Gunnar Solskjaer takes control of his first full season in charge at Old Trafford.

Mauricio Pochettino’s side will go into the game high on confidence after beating Juventus at the end, thanks to an outrageous halfway line winner from Harry Kane.

The Red Devils have no reason not to go for it either having gone three games on four unbeaten – against Perth Glory, Leeds United and Inter Milan – and without conceding a goal.

Both teams will be looking to make a statement before the new Premier League season kicks-off. It will also show us how our players’ fitness levels are coming on, whilst being compared with English opposition which we will be competing against throughout the season.

Spurs confirmed that Hugo Lloris has flown back to the UK to receive treatment for tonsillitis.

Danny Rose didn’t travel and could be about to leave the north London outfit.

As for United, Solskjaer confirmed that Victor Lindelof is back in contention to play after hobbling off against Inter with a suspected thigh injury, as per ManUtd.com.

Romelu Lukaku has been ruled out of action again.

Expect a fast-paced and competitive encounter even though it’s only a friendly.

United should be fitter because the players have more minutes under their belt, though Spurs will provide a greater challenge than any of the previous opponents on tour.

I think we’ll edge this one.