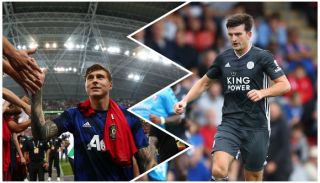 The Red Devils have been needing to sign a top centre-back for years, especially after struggling more than recent memory can recall last season.

Maguire has been Ole Gunnar Solskjaer’s prime target and the club has already seen a £70m bid rejected by Leicester City, who reportedly want an extra £10m for the England international’s signature.

Lindelof emerged as United’s best defender last season, although the best of a bad bunch. He will expect to partner whoever comes in to bolster Solskjaer’s defence, should the club get a deal finalised before the transfer window shuts.

And the Swede is looking forward to the club potentially signing a top defender as it will motivate him to step up his own game.

“I like the competition. I love it, actually. I think it’s great for a club to have that competition,” Lindelof said in an ESPN interview.

“If you have good players in your position you have to work hard every day, especially in training, and that helps a team to go to the next level as well.

“For me it’s perfect. I like it. I think everyone at this club wants to be at the highest level. I’m very good friends with them all.

“In training we compete and then off the pitch we are friends. That’s how it should be.”

Solskjaer also has Axel Tuanzebe to give opportunities this season and he could come in and surprise a few.

We shouldn’t sign Maguire and say ‘right, Lindelof was the best defender last season and walks straight into the team to partner Maguire’ when there’s a possibility they won’t be the best match.

Solskjaer will give everyone a chance at some point but it’s promising to hear Lindelof enthusiastic about a potential new arrival.