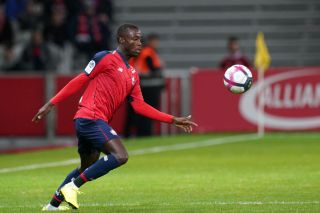 Lille star Nicolas Pepe is reportedly open to joining Manchester United as the Premier League giants see an opening offer of approximately £71m turned down for the player.

A report yesterday from La Voix du Nord, as translated by Get French Football News, claimed United had made a £71m offer for the winger, but now it looks like Lille are demanding more for his signature.

The valuation of players has either gone through the roof or United strangely enjoy placing bids that will be ignored, because it seems to be the case over the past month with Harry Maguire and Bruno Fernandes.

In a tweet below, the French edition of Yahoo Sport claims to have the latest on United’s reported pursuit of Pepe. Apparently Lille have turned down the offer from United, but they never mentioned a specific fee.

But if reports yesterday from France are true, then the Red Devils may need to consider upping their bid to find an agreement with the Ligue 1 outfit.

Napoli are also said to be tracking the Ivory Coast international, so United should feel a bit of pressure to get a deal over the line as soon as possible, if they genuinely want the player.

Pepe would be an upgrade on Alexis Sanchez and Jesse Lingard, but he would also suit the team a lot more than Romelu Lukaku.

Ole Gunnar Solskjaer is looking to build his attack on pace.