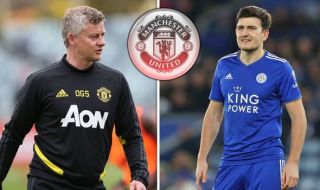 Ole Gunnar Solskjaer plans to add Harry Maguire to his squad this summer, with the Red Devils manager leaning towards playing two ball-playing defenders at the heart of defence.

United are big favourites to sign the England international in an £80m deal, with The Independent’s Miguel Delaney claiming on Sunday that a deal was imminent.

The transfer has dragged on all summer with the United boss keen to strengthen his defence which was subject to criticism last season.

The Independent goes on in a separate report to claim Solskjaer plans to partner Maguire in defence with Víctor Lindelof, who was easily the team’s best option in defence last season.

The Red Devils have been linked with other centre-backs such as Toby Alderweireld and Kalidou Koulibaly.

Alderweireld looks set to remain at White Heart Lane, whereas interest in Napoli’s Koulibaly cooled, therefore it is Lindelof who joined from Benfica two years ago that will keep his place in Solskjaer’s side.

The Chuckle Brothers (Phil Jones and Chris Smalling) were handed new contracts, but it’s a common view around Old Trafford that they’re not good enough and shouldn’t be getting many games in the side once the season kicks off.

Lindelof made 40 appearances last season so unlike his team-mates, he has proved that he can stay fit.

Take a look at Eric Bailly for example… he can’t get a run of games and should be facing his last chance in a United shirt this term.