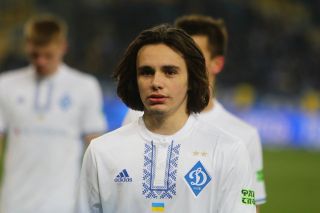 Manchester United are among a host of Premier League clubs keeping tabs on Ukraine international Mykola Shaparenko, according to reports.

According to Caught Offside the Dynamo Kiev midfielder is attracting interest from Chelsea, West Ham and Arsenal, as well as United.

The 20-year-old broke into Kiev’s first team in November 2017 and has since gone on to keep his place in the side, mostly operating in attacking roles. He has scored six goals and provided four assists in 23 Premier Liga appearances in Ukraine.

Sharparenko played against Chelsea last season in Kiev’s 8-0 aggregate defeat in the Europa League, so they’ve already seen him up close. He also scored a header against England’s U21 side in a Euro 2019 qualifier at Bramall Lane.

Despite being linked with the Ukrainian, Chelsea will have to wait after being banned from making transfers this summer.

But with claims Arsenal and United are interested in signing Shaparenko, he has more than one possible route into the Premier League, which could make him a player worth watching over the coming months.

Moreover, the report goes on to suggest Shaparenko may struggle to obtain a work permit immediately.

Sharpenko is under contract with Kiev until 2023 and is potentially a player Ole Gunnar Solskjaer will asked to be scouted over the coming season.