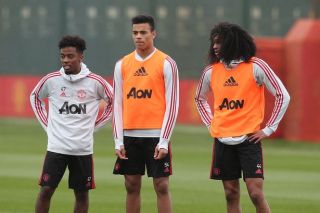 After a barren few years, a decade perhaps, of producing our own ready made replacements for outgoing players, the question has to be asked what’s going on with our youth development?

For a club that has built its foundations on homegrown players, a club that produced the Class of ‘92 that took the world by storm, players breaking through to the first team are few and far between.

Take Marcus Rashford, for instance. Named on the bench for a game he was never meant to play, a pre-match warm up injury thrusts him into the frying pan and we have a lad who was never intended to be the player he was at that stage, quickly becoming a guy we depended on more so than allowed time to develop, not ideal and it could, perhaps, be questioned if this stunted his true development as a player, entering the limelight that quickly and the pressure that goes hand in hand with it.

Luckily, Rashford has not done too badly, however the fans need to remember this guy is still at the start of his career, there’s a lot more to come, expectations at our club are so high that meeting them isn’t always within reach as a young player, and given the current negativity clouding the club, players like Marcus Rashford are judged much harsher than they would have during the Fergie era.

That’s a success story, but there’s a flip side, there’s a revolving door of the next big thing turning out to be a flop, or maybe not quite a flop, but simply not being good enough for United.

Adnan Januzaj springs to mind. Another kid that burst into the team at a time when the Old Trafford faithful needed a hero, needed something to cling onto that gave us hope as the downturn began post dominance.

A young, plucky kid, who had a few tricks up his sleeve and seemed to ooze the confidence we crave in a first team player. Rumours quickly started to surface of interest from PSG for a touted £50m, and the general feeling was amusement. We’re hardly going to sell this kid, he’s going to be sensational.

Sadly, those tricks he had up his sleeve were soon realised by the opposition, and his underwhelming performances and lack of end product led to his departure from the club to a career that certainly hasn’t lived up to the original thoughts.

Common sense tells you that blooding youth into a side is far easier when that side is successful, settle and not requiring any remodelling or rebuilding. The young player can be slowly introduced to a squad that’s cohesive and they are afforded the chance and time to get their experience as they attempt to break into a side where top quality is a minimum requirement.

Trying to introduce a kid to the current side, with the fans baying for blood from some of the big names as it is, must be a terrifying thought for any prospective talent, but with the transfer market in the ridiculously inflated state it’s in, you’d have to think that producing your own makes massive financial sense.

We’re currently seeing a flock of youth coming through, Scott McTominay has already made the move into first team regularity, Axel Tuanzebe has excelled on loan, Angel Gomes, Mason Greenwood and Tahith Chong are highly thought of at a very young age and have been given a taste of first team action, but it’s surely a bit early for these, sending them on loan to cut their teeth on championship football is surely the wise move if these lads are to make it through to an eventual first team spot.

As one of the biggest clubs in the world, with what should be a world class setup, United need to start getting them scouts working and start organically giving us players that can become household names, rather than a persistence for splashing the cash on players we could have signed at a younger age, a la Harry Maguire, and now are forced to pay huge fees for.