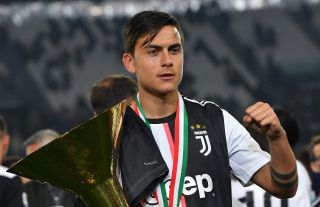 The report goes on to suggest Juventus would sell the Argentina international if United are willing to match their £70-£90m valuation.

This claim surfaces on the same morning United are reported to have made a €80m bid to sign Lille winger Nicolas Pepe, as per La Voix du Nord, cited by Get Football News France.

So either the meaning of ‘perfect’ has lost its meaning, or some reporters are bored and have lost their way.

READ MORE: Fernandes, Maguire, Wan-Bissaka: How Man Utd could line up in 2019/20

Dybala is an exciting player as he showed against United in the Champions League last season. He’s been with Juventus since 2015 and has scored a total of 78 goals in four seasons.

The arrival of Cristiano Ronaldo had a negative impact on Dybala though, scoring just 10 goals last season compared to 23 the year before.

Juventus have recently sealed a deal to bring the excellent Matthijs de Ligt to Turin, so selling Dybala could go a long way towards balancing the books for the Old Lady, who will be going all out to win the Champions League.

There’s also a feeling Juventus could be using Dybala as bait to get Paul Pogba back to the club.

Dybala’s versatility would be an asset to most teams. His ability to lead the line or to play as a secondary striker is up there with the very best, but at Juve his influence on the team became less prominent over the past year.

The Argentine would be a more expensive alternative to Bruno Fernandes, but what happened to Solskjaer wanting to avoid superstar signings like Gareth Bale.

Dybala would be a very good signing, but United are running out of time with the transfer window closing in August. He would improve the players around him and there’s a pretty link with Pogba from the time they spent together as team-mates in Turin.

It’s hard to say he should be a priority over Fernandes when the club has worked on that transfer all summer, still trying to make it happen.

Right now I just want to see deals for Harry Maguire and Fernandes finalised. Anything else would be a bonus, especially Lille’s Pepe.