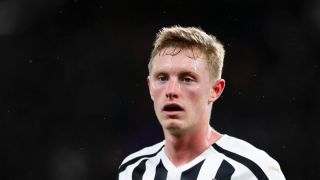 According to reports, Manchester United are plotting a £30m offer for Newcastle midfielder Sean Longstaff.

The Mirror claim that the Reds are willing to test Newcastle’s resolve for the player, who has been identified as a priority transfer target for manager Ole Gunnar Solskjaer this summer.

United desperately need new additions in midfield following recent departures of Marouane Fellianini and Ander Herrera, and rather surprisingly, Longstaff seems to be the one they are looking at.

The £30m offer that the report suggest seems more than reasonable given the 21-year-old has made just 13 appearances at St James Park.

However, it is said that Newcastle are holding out for £50m for the youngster, with United’s capture of Aaron Wan-Bissaka at a similar price the benchmark for the midfielder’s value.

Despite operating in a highly-inflated market, Longstaff’s value is still ridiculous given his lack of first-team experience. Anyhow, he fits Solskjaer’s recruitment mould of young, homegrown talent after the signings of Aaron Wan-Bissaka and Daniel James.

If Longstaff is brought in this window, the Reds must also look to sign a more established creative option as there is still a weakness going forward.

Sporting Lisbon’s Bruno Fernandes seems to be the perfect answer to fill this role, and has already that revealed he wants to play in the Premier League, as per the Sun.