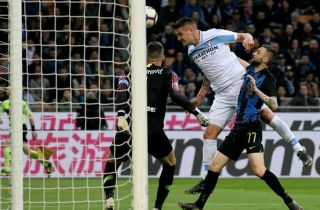 A year has passed since Lazio’s Sergej Milinkovic-Savic was arguably the most in-demand midfielder in football. That’s how it came across in the gossip columns when Manchester United and other elite clubs were linked with the Serbia international on a daily basis.

It’s now being reported by Tuttomercatoweb that five clubs – including Premier League trio United, Man City and Tottenham Hotspur – are keeping tabs on the 24-year-old. The other clubs include Juventus and Paris Saint-Germain.

Regarded as Lazio’s most prized asset, SMS has scored 31 goals and recorded 18 assists in 162 appearances for the Italian club – but this probably presents a good time to leave for something new, with some of Europe’s biggest clubs reportedly chasing his signature.

SMS can offer quality defensively and in the final third, making him the most well-rounded option in Simone Inzaghi’s midfield. His physicality could go a long way towards adapting to the Premier League, and after a quiet season last term by his own standards, it could be a matter of needing a fresh start in unfamiliar surroundings.

The report adds that it will take in excess of €80m to lure SMS away from the Stadio Olimpico, which is a lot less than the price tags that were touted to the press 12 months ago.

United needed midfield additions then, but they need them more now after losing Ander Herrera.

Ole Gunnar Solskjaer has yet to replace the Basque midfielder, who has signed for PSG ahead of the new season.

All of the other clubs like with SMS have done business this summer for midfielders, as listed below:

Speculation continues to be rife over the future of Paul Pogba, so imagine United losing the French midfielder next before they sign a single midfield reenforcement? Manchester United are still being run into the ground.