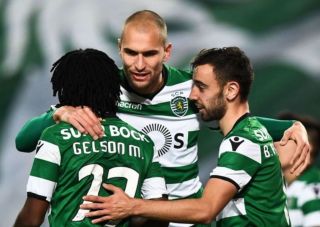 We have been hearing the Bruno Fernandes to Manchester United links all summer.

Most fans seem to think the Sporting Lisbon midfielder is exactly what the Reds need, so it is frustrating that seemingly little progress has been made in attempts to sign him.

The 24-year-old is the creative influence that would be perfect in midfield, and also seems a very attainable option given his ambition to play in England.

“The president decides that, not me. I don’t care about the market, I’ve talked about this many times. The only thing I can do now is catch the plane so I don’t miss it. Will this be the last match for Sporting? I don’t know, it’s the coach who decides. I told you I’d like to play in England, but that’s not what interests me. It may be when the club decides,” the Portuguese international said as quoted by A Bola.

According to fellow Portuguese publication Record, United could sign Fernandes for €70m this summer, but are looking to open the bidding at €62m.

The valuation set by Sporting seems reasonable given the nature of the highly-inflated market and the Reds should definitely look to pull this deal off.

Here’s what some United fans think:

Just pay the money for Fernandes, for me our midfield needs a big upgrade even more so than our defence. #MUFC

If Lukaku plays the next match, he’s staying. Get him out and bring in Pepe, Maguire, and Fernandes #MUFC

I just hope we at least get a @HarryMaguire93 and Bruno Fernandes deal done. Dont care about anything else just want those 2. Pay what needs to be paid. The club can afford it surely!!!! #TransferTalk #MUFC @ManUtd

This is getting beyond ridiculous. For once a team and their player is being straight about what they want and we still cant get the deal done. If someone comes in now and shows 100% commitment to fernandes now he could pick them over us #mufc snooze u lose get it done @manutd https://t.co/YV5jB9Iqwq

NICOLAS PEPE AND BRUNO FERNANDES HAVE MIND BLOWING TALENTS, THEY WILL BECOME SUCCESSFUL IF THEY ARE ON THEIR WAY TO THE THEATRE IF DREAMS. WE NEED TO BUILD AROUND PAUL POGBA AND THESE PLAYERS WILL FIT IN WITH HIM.

Our board is just sluggishly shambolic when it comes to conducting transfer moves. Consistently haggling to not overpay for a player who is determined to join us. Fernandes is evidently worth a staggering £60 million, do not be lackadaisical and conclude the move now! #MUFC