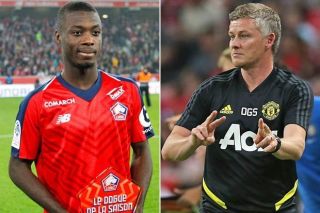 Lille president Gerard Lopez has revealed that Nicolas Pepe’s future has ‘almost’ been decided amid strong interest from Manchester United and Liverpool.

Pepe had a terrific Ligue 1 campaign last season netting 22 goals, which has led to months of speculation over his future.

The French side accept that they will soon lose the 24-year-old, and according to La Voix du Nord, via Get Football News France, United have made an offer close to €80m to try to sign the Ivorian.

The same outlet claims that Napoli, Arsenal and Atletico Madrid are all possible destinations for the former Angers man and that Lille have a replacement in Dodi Lukebakio all sown up, so now it comes down to the player to make a decision on his future.

Asked about Pepe’s future, Lille president Lopez told La Voix du Nord, as quoted by The Metro: “In terms of departures and arrivals, if a player leaves, we will go and get what we need.

“For Nico, it is almost done and he could have left last summer.

“It is true that there are big offers and big clubs in for him, so I think [he will leave].

“Aside from that, you never know in football.”

With Romelu Lukaku potentially on his way to Inter Milan in the coming weeks, Ole Gunnar Solskjaer has reportedly identified Pepe as a possible option to replace the Belgian striker, as per The Times. That might leave United with one less recognised striker, but fear not with Mason Greenwood breaking into the team as backup for Marcus Rashford.

Though earlier this month, Lopez confirmed that Liverpool had held discussions to sign Pepe.

“I know there have been discussions with the player, not with us as a club,” he told RMC Sport.

“Liverpool have players in those positions and I read that maybe there were players who could leave, or not.

“I am not particularly focused on Liverpool. But it is true that there have been discussions with agents.”