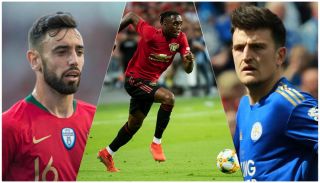 Manchester United are still looking to make signings with time running out.

The new season is upon us and Ole Gunnar Solskjaer has added just two players to his squad.

A lot of deadwood remains in the squad with United struggling to shift players earning significantly more than they would elsewhere.

Solskjaer has signed Daniel James from Swansea City and Aaron Wan-Bissaka in a big money move from Crystal Palace.

Reports are constantly linking United with different players, but a lot point to Leicester City’s Harry Maguire and Sporting Lisbon’s Bruno Fernandes, both of whom would could into the starting eleven in place of current players.

Real Madrid know signing Paul Pogba will be difficult, so the French star remains in our predicted line-up for the coming season.

The defence looks a lot better than it did last season, and with De Gea set to put an end to talks about his future by signing a new deal at Old Trafford, as per The Guardian, he should return to top form without the niggling distractions that come with being the most wanted goalkeeper in football.

The Independent claims Solskjaer sees Victor Lindelof as his partner for Maguire once the England international joins, which suggests the Norwegian is going for two ball-playing defenders to operate in a side with flying full-backs in a system set up to high press.

Full-backs will both be expected to get forward and chip in with the goals, with a greater understanding with midfield players than seen previously.

While reports suggest Pogba will be given a more advanced role, it will be intriguing to see how the Frenchman plays if Fernandes does come in. And will Nemanja Matic keep his place with Scott McTominay knocking on the door?

Patience is required with James but this is the first time in years that United have a specialist winger. He can operate on both flanks, so it will be down to Solskjaer to switch things up a little depending on the opposition.

Anthony Martial and Marcus Rashford both need to improve and at least chip in with double figures in the Premier League. They’re both capable of great things but have been guilty of stalling a bit the past two seasons.

Send us a tweet with your predicted XI for the new season – @StrettyNews.