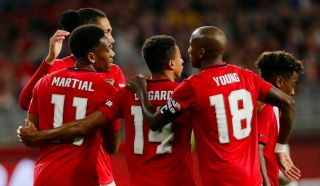 Ole Gunnar Solskjaer’s side struggled to find the back of the net towards the end of last season, and Ince believes none of the Norwegian’s attacking options have proven their worth.

“Jesse Lingard was diabolical last year, he really, really was.

“There’s Alexis Sanchez. They got nothing out of Sanchez whatsoever.

“So as much as we’re talking about Chris Smalling and Harry Maguire, surely we’ve got to be looking at who’s going to be playing up top.

“We need to be looking at that because attacking-wise they’re not great.

Ince is right to suggest the Reds are weak in attacking areas, but frailties also lie in defence so Maguire or another centre-back should certainly be prioritised this summer.

Perhaps an attacking midfielder would be the creative spark needed to fuel more goals for the likes of Rashford and Martial. The pair are undoubtedly still inconsistent in their performances, but someone like Bruno Fernandes could really get the best out of them.

Ince does not hold back in this rant and it highlights how far the Reds currently are in all areas, but there is still reason to be optimistic.

Rashford has been clinical in putting away his chances so far in pre-season, which will only build confidence after goals dried up as last season ended in a whimper.

Mason Greenwood is another exciting young prospect staking his claim for the first-team, and at 17-years old is already proving he has what it takes to star for the Reds next year.

But United could still do with a quality right-wing addition and according to La Voix du Nord, via Get Football News France, the club have made an €80m bid for the Ivorian.

With under three weeks until the transfer window shuts, it is imperative Solskjaer strengthens in the squad’s key areas of weakness.