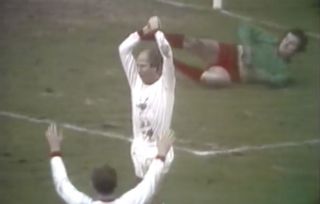 Lime Street or Stanley Central as Reds knew it because of the sniping Mickey’s fondness for a blade, and not just any old stanley knife. These charmers would force two blades into the slot but forced apart with a couple of matches so when they cut you, the stitching would leave a wide scar for life.

As I said, Real charmers these salt of the earth, lovable Scousers.

We arrived at Lime Street and the usual welcoming committee were outside. Reds burst through the police line and straight into them, the looks on their faces as we flew at them… just priceless.

Round one to us.

On the way to Anfield, the running battles along Scotland Road were fierce and bloody, but again as usual, the scousers were dealt with harshly.

It was around the time of getting to the ground when we decided to go in The Kop (you could do that in those days if you were quiet and “on it”).

After the initial shock from the Mickeys, we were set upon from all sides but held our own.

The Old Bill came eventually and escorted us around the pitch to the Anfield Road end where it was already resembling a war zone.

I must admit, as a 15-year-old old walking around that pitch, I felt like a fucking movie star.

Then reality hit, or rather a bar of soap with a nail through it hit me. Full on, smack in the face, thrown from the vermin in their end.

They used to chuck apples with razors in them, elastic bands firing all kinds of metal at us. Very creative.

I only had a gash on my cheek and a few bumps on the head from various missiles, but the train home to London was like a mobile army hospital (not for the first time) and on arrival back to Euston, the usual Chelsea/West Ham and Arsenal boys were waiting for us.

Even that though paled beside the away trips to Newcastle 3 seasons on the trot.

More about those next.