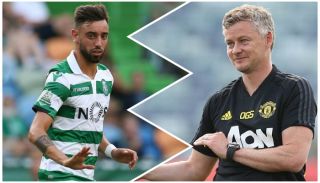 Manchester United target Bruno Fernandes has broken his silence on a potential move to England, admitting he has a desire to play in the Premier League.

The Portuguese playmaker, 24, has been on Ole Gunnar Solskjaer’s radar all summer but a move hasn’t managed to happen yet. Instead fans, the two clubs and player have had to sit through a dragged out saga, which too often seems to be the case in deals that involve United.

It’s understood that Sporting and United have yet to come to an agreement on the Fernandes’ valuation, and the Red Devils are already working on another deal to bring Leicester City’s Harry Maguire to Old Trafford before the transfer window shuts.

Solskjaer remains level-headed but deep down he must be getting impatient like the rest of us.

According to Sky Sports, Fernandes said: “The only thing I can do now is that I need to catch the plane so I don’t miss it. Will this be the last match for Sporting? I don’t know, it’s the coach who decides.

“I told I’d like to play in England, but I don’t care about it right now.

“If it could be this season? It could be when the club decides, I’m not in charge.”

It was evident in United’s win over Inter Milan that a more elite creative player is needed in midfield to work alongside Paul Pogba, who, quite clearly, can’t do everything on his own.

Jesse Lingard offered lots of energy in the first half and played well, but he doesn’t cut the mustard with Fernandes sounding like a better option with goals to his game.

But unless United meet Sporting’s valuation of the player – said to be in region of €70m – they won’t be getting Fernandes this summer.