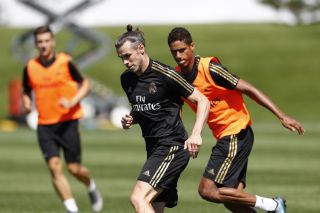 Every summer Manchester United tend to get linked with a move for Gareth Bale, but despite previous attempts from the Red Devils to make a deal happen, the Welshman is no longer a target for the Premier League club.

Zinedine Zidane made his feelings known over the weekend, stating that Bale wasn’t involved in their 3-1 pre-season defeat by Bayern Munich because he is “very close to leaving” Real Madrid.

Speaking after the game, Zidane said (as quoted by BBC Sport): “We hope he leaves soon. It would be best for everyone. We are working on his transfer to a new team.

“I have nothing personal against him, but there comes a time where things are done because they must be done.”

Unsurprisingly, Zidane’s comments have not gone down well with Bale’s camp.

The belief is that the player should have been shown more respect for what he’s done since moving to Real Madrid in 2013 — winning the Champions League four times, more than Zidane did as a player.

Which obviously isn’t to say Bale is better, but it’s such a strange situation, right down to his legacy/status at the club.

Jonathan Barnett, who represents Bale as his agent, went on to give an interview to ESPN over the weekend to call Zizou a “disgrace”.

“Zidane is a disgrace to speak like that about someone who has done so much for Real.

“If and when Gareth goes, it will be because it is in the best interest of Gareth and nothing to do with Zidane pushing.”

According to the Manchester Evening News, United have made four attempts in the past to sign Bale, but will not be trying again this summer.

It is suggested that Ole Gunnar Solskjaer wants the club to step away from signing superstars and to continue finding the best young talent in the game.

United have made just two signings so far this summer and are running out of time to get more business done before the transfer window closes. Welsh winger Daniel James arrived from Swansea City and the exciting Aaron Wan-Bissaka joined after an unbelievable breakthrough season with Crystal Palace.

Bale is 30 and has a cloudy track record with injuries, which is probably the reason he’s considering a move to China to earn £1m-per-week, as per The Mirror.

That’s savage money and it’s hard to see another European club matching the salary he gets at Real Madrid.