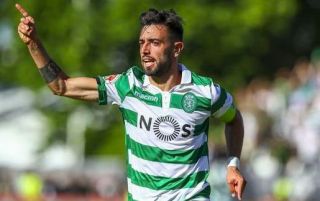 The Bruno Fernandes to Manchester United transfer rumours have not gone away during the summer transfer window.

It makes sense, given Fernandes would be a perfect addition for the Reds ahead of next season. The 24-year-old is the creative midfielder that manager Ole Gunnar Solskjaer needs, having scored 32 goals for Sporting last time out.

However, with just three weeks left, no deal yet seems imminent for the Portuguese international.

Sporting President Frederico Varandas has been heard speaking about Fernandes, but remained coy on the star’s future.

I don’t know if there are many or if there are few [interested clubs],” Varandas told RTP, as quoted by Sport Witness

According to Portuguese publication Record, United will have to pay €70m to secure Fernandes’ signature, which still seems reasonable given the nature of the highly-inflated market and the midfielders recent performances.

This is a deal the Reds should definitely be looking to complete before the transfer window shuts in under three weeks time. It is crucial Solskjaer brings in another offensive option this summer as goals were hard to come by last year, and an extra creative spark is still required.

Time is running out in the transfer window with United still needing a central defender and midfielder before the season starts against Chelsea on August 11th.