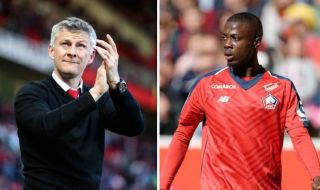 Manchester United reportedly want to use the funds raised by the sale of Romelu Lukaku to sign Lille winger Nicolas Pepe.

As per BBC Sport, the Reds have already rejected Inter Milan’s offer of £54m for Lukaku, and are holding out for their £75m asking price.

Their report claims Inter’s move for the Belgian international is likely to hinge on the future of striker Mauro Icardi, who is said to want to leave the club.

Corriere dello Sport, however, now report that Inter’s chances of signing Lukaku have increased as United want to use his funds to seek new replacements.

They say that Nicolas Pepe is manager Ole Gunnar Solskjaer’s preferred option to replace Lukaku, while Arsenal forward Pierre Emerik-Aubameyang is also being considered. It is claimed both players would be better suited to Solskjaer’s plans at the club, but a move for the Premier League’s joint Golden Boot winner seems much more difficult to pull off.

The Times earlier reported that United had advanced their long-standing interest in Pepe, 24, who is valued at around £70m.

Pepe is seen as one of the most exciting attacking talents across Europe and it is clear to see why.

The Ivorian scored 22 Ligue 1 goals last campaign as well as contributing 11 assists, and would certainly be an exciting addition to fill the right-wing position in Solskjaer’s side.