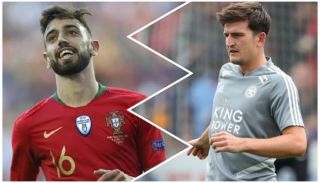 Harry Maguire to Manchester United will be announced soon which should allow the Red Devils to concentrate on completing another transfer before the deadline.

That’s according to Miguel Delaney of the Independent, who claims Maguire’s move to Old Trafford is ‘imminent’, with an official announcement expected shortly.

Whether there will be a breakthrough today or later this week remains to be seen, but Delaney doesn’t throw around lines like that without something set in stone behind the scenes.

Maguire is a good signing for United, even if a little on the expensive side…

The Independent claim he will cost the Red Devils around £80m, but that may include an initial £70m with an extra £10m in bonuses.

However, the report adds that United won’t stop there. The club is also working on signing Sporting Lisbon playmaker Bruno Fernandes to give Ole Gunnar Solskjaer more creativity in midfield.

Both Maguire and Fernandes would be solid attentions for United, along with Daniel James and Aaron Wan-Bissaka, who both joined earlier this summer.

Another name worth keeping track of is Lille’s Nicholas Pepe, with The Times suggesting talks have already started with United interested in replacing Romelu Lukaku with the Ivory Coast star.