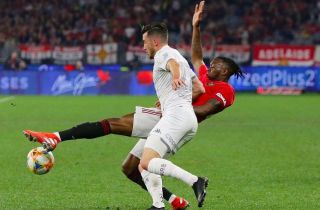 Aaron Wan-Bissaka has already made himself a fan favourite at Manchester United.

The England u21 international has excited fans with his impressive performances so far on the club’s pre-season tour.

What is most striking about Wan-Bissaka’s play is his tackling ability, for which he has already been given the nickname ‘The Spider’.

The 21-year-old has a fantastic ability to lunge in for challenges and consistently win the ball, and it has not gone unnoticed by some of his United teammates.

“We were watching on the side and it’s absolutely ridiculous the way it looks like he’s diving in, but he’s so controlled in the way that he does it,” Scott McTominay told the club’s official website.

“It takes time to come to a new team and adapt but he’s settled in straightaway. He’s just like one of the boys and it’s nice to have him around as well. He’s another big player that’s going to be a great addition to the squad.”

It’s great to see Wan-Bissaka already at home in a Manchester United shirt. The Reds have been crying out for a defensively solid right-back for a while now and it looks like they’ve finally found one.

The youngster has already made an impression on his new teammates as well as the fans, and we hope he can continue his encouraging form into the new season with the first-game against Chelsea now under three weeks away.

Check out some of Wan-Bissaka’s stand out moments so far in pre-season below:

Aaron Wan-Bissaka: "I love it [tackling]. I get a buzz off every tackle." 🔴 #mufc