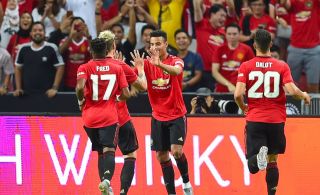 Manchester United midfielder Juan Mata has praised teenage striker Mason Greenwood’s ‘hunger’ after he scored the winning goal in the friendly against Inter Milan on Saturday.

“Mason has a lot of qualities and the most important one is his mentality,” Mata told the BBC.

“He’s hungry to improve and to give his all for the team.

“We are very happy he’s finding his feet in the first team and gaining confidence. I am sure he’ll score many goals for this club.”

Greenwood has been one of the standout players for the Reds during the pre-season tour, scoring against Leeds United and Inter.

The academy graduate has already been promised more opportunities by manager Ole Gunnar Solskjaer next season, and could even be in the frame to start against Chelsea in the first game of the Premier League season.

His composure shown in his finish on Saturday has excited the United fanbase, with some even comparing his style to Robin Van Persie; high praise indeed.

There is no doubt the club has a special talent in Greenwood, who at 17-years-old is showing maturity in his performances far beyond his years.

The youngster can only improve and has the versatility to operate anywhere across the front three in Solskjaer’s set-up.

In Mata, who recently signed a new deal to stay at Old Trafford, Greenwood has the model professional to look up to and take advice from to improve and continue his development.

Mason Greenwood reminds me of Robin Van Persie so much. Proper talent. 🌟 pic.twitter.com/C01bSlYIXY