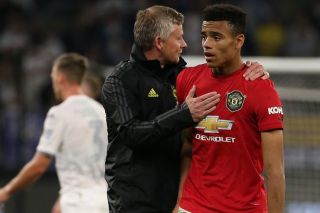 Brain McClair was not only the first Manchester United player after George Best to score 20 league goals, he went on to have a successful stint coaching youngsters in the club’s Academy such as Paul Pogba and Jesse Lingard.

Now a frequent Twitter user, we are often exposed to his views on the current United side and it usually makes for good reading.

McClair has been getting in on the excitement surrounding Mason Greenwood after the 17-year-old netted his second goal of the pre-season tour.

Greenwood is making moves to get into the first-team and hasn’t put a foot wrong on the tour.

Manager Ole Gunnar Solskjaer has already made it clear he will be considered for the Premier League opener against Chelsea.

‘Choccy’ says that if United can look after Greenwood the same way Sir Alex Ferguson did with Ryan Giggs and Paul Scholes, the youngster can become every bit as good as the legendary duo.

McClair believes Greenwood has the same tools as Giggs and Scholes.

If United can look after Greenwood in the same way Ferguson did with Giggs/Scholes then he can be as good as they were, as he has the tools for the job that they had! 🙂