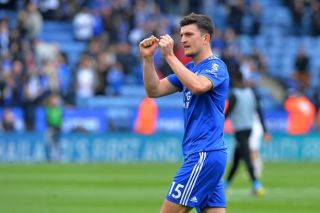 Manchester United have edged closer to completing the transfer of Leicester City’s Harry Maguire, according to reports.

Bleacher Report journalist Dean Jones claims United are ‘agreeing terms’ of an £80m deal for the Leicester centre-back, which is the news fans wanted to hear with timing running out to make transfers.

Maguire has been strongly linked with a move to Old Trafford all summer, though there was that brief period when the Red Devils seemed to try their hand at luring Matthjis de Ligt away from his former club Ajax.

The Netherlands international ended up at Juventus – leaving Barcelona and Paris Saint-Germain, as well as United without their preferred defensive target.

But at least Maguire is one of the most dominant centre-backs currently playing in the Premier League. If and when he joins, playing in the top-flight of English football will be nothing new to him.

United finally agreeing terms on the £80m Maguire deal.
Mad amount of money to spend on him and Wan-Bissaka this summer but also very necessary

Jones doesn’t sound convinced by the amount United are having to pay for Maguire, but that’s the market today and United can’t go into the new season without signing a centre-back.

They did that twelve months ago when José Mourinho was manager. Look at how that turned out!