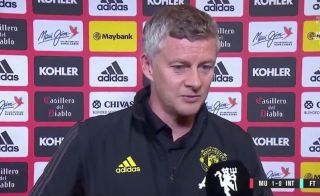 The United boss thought the lads pressed really well in the first-half, but lacked a cutting edge which was evident in the final third.

Jesse Lingard, who brings energy to the team whenever he plays, just isn’t that elite player we need in and around the box to break teams down. That’s presumably why Solskjaer wants to sign Sporting Lisbon ace Bruno Fernandes before the transfer window shuts.

That said, United were a lot more decisive in the second-half and hit the post shortly after the interval.

Mason Greenwood scored the only goal of the game as a substitute, and Solskjaer can be happy with the overall performance as United dominated Inter throughout the game.

Watching on, you were never be in doubt about which team had the upper hand, and the Italians offered nothing going forward.

Solskjaer goes on the stress the importance of his players enjoying their football.

Let’s hear from the boss, who spoke to #MUTV after today’s #MUTOUR win: pic.twitter.com/tUSonaHCm0