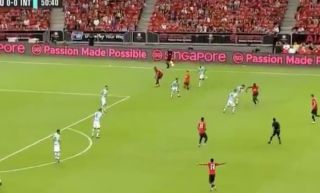 Paul Pogba has been on fire for Manchester United today.

Make no mistake about it, the French midfielder looks like he’s loving life on the pitch against Inter Milan.

It remains scoreless as we approach the hour mark but United are knocking on the door, creating chance after chance, with Inter hanging on for dear life.

Just after the second half kicked off, Pogba received the ball in the centre of the pitch and drifted forward showing an incredible degree of skill.

He doesn’t just beat one Inter player but two, teasing them with the ball before having a pop at goal.

There’s so much going on with the ball at Pogba’s feet, we’re unsure whether even a name on the skill he produces. It looks like the Inter players are under some sort of spell!

Check the video out below: