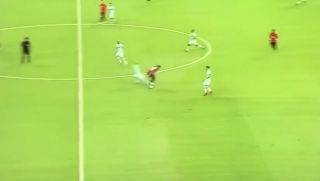 Not only did Mason Greenwood score the only goal in Manchester United’s win over Inter Milan, he also showcased his skill and calmness throughout the second-half to show the world what an amazing player the Red Devils have on their hands.

We must take a second to realise he is just 17-years-old… Ole Gunnar Solskjaer talks about this youngster being able to take free-kicks and penalties either either foot, but I can’t think of another footballer being able to do that to such effect.

Greenwood came on as a substitute against the Serie A giants and looked at home. It’s incredible for such a young player, how he can play for one of the biggest clubs in the world without any pressure.

He took his goal very well too, showing a degree of bottle inside a packed box to glide the ball home.

But Greenwood did more damage than scoring the winning goal in United’s third pre-season game to make it three wins from three.

The Manchester United youngster pulled off a classy roulette to beat his man in the centre of the pitch, which shows the calibre of player we’re talking about, as seen below:

No wonder Solskjaer smiles whenever Greenwood is mentioned. Time to unleash the skill demon!