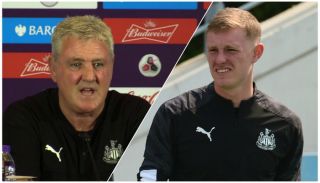 Steve Bruce says he wants to keep Sean Longstaff at Newcastle, amid interest from Manchester United.

The 21-year-old midfielder only broke into the first-team squad last season, making 9 appearances, but that hasn’t stopped the Red Devils from showing interest.

Because he’s played so little football at senior level, it’s difficult to have a strong view on this one.

But Newcastle wanting £50m for his signature is a joke. They hardly rate him that highly if he’s yet to make a dozen appearances for the club at senior level…

However, Bruce, appointed as head coach this week, said (quotes via Manchester Evening News): “He’s a player we want to keep – he’s had a remarkable rise. He’s everything you would want in a player – big and athletic – and he handles the ball well.

“He is the type of player you want to build your team around. I’ve only seen him for a day, but he has had an unbelievable rise. Very much reminds me of a Michael Carrick. I’m not aware that he’s going to Manchester United – I’m not aware of that at all.”

Still, it’s interesting that Bruce feels the need to address rumours linking Longstaff with a move to Old Trafford.

We are clearly in the market for young homegrown talent and people are giving the young Englishman high praise.

It’s early days in his career, but if Newcastle want £50m now, how much will they demand in 12 months’ time?

Bruce is more likely to do United a favour than Newcastle’s previous manager, Rafa Benitez, so hopefully they drop their unrealistic valuation.