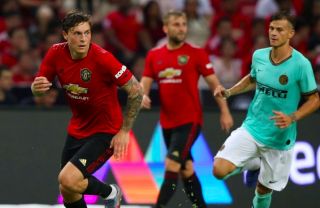 Manchester United manager Ole Gunnar Solskjaer has provided injury updates on Victor Lindelof and Tahith Chong, who were both taken off injured during the pre-season friendly victory over Inter Milan in Singapore.

Lindelof had to be replaced by Phil Jones early in the second half, with Chong being brought off for Angel Gomes late on.

Chong was one of United’s most dangerous players in the game, and caused the Inter defence all sorts of problems during his cameo in the second half.

“We don’t know yet… I think they should be OK. We’ll have to assess it (Lindelof) tomorrow. I don’t blame the defenders for trying to stop him (Chong),” Solskjaer told MUTV, as quoted by Manchester Evening News.

Lindelof is United’s best central defender so we hope he can recover quickly with the remaining pre-season games coming thick and fast before the Premier League campaign begins against Chelsea on August 1th.

Chong is also making his way into Solskjaer’s first-team plans, and it was not a surprise to see him being brought off after being repeatedly hacked at by Inter’s defenders.

The Reds face Tottenham next Thursday in Shanghai before a trip to Oslo to face Kristiansund on the 30th July.