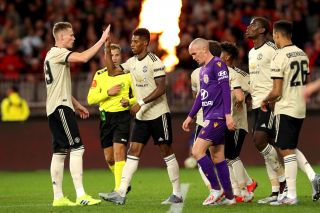 Ole Gunnar Solskjaer could switch to a 4-2-3-1 formation for the new season.

The Manchester United boss stuck with a 4-3-3 formation for much of his time in charge last season, but he has reportedly been working on some slight tactical tweaks ahead of the upcoming campaign

According to prominent journalist Andy Mitten, writing for GQ, Solskjaer and his coaches have been doing some work in pre-season to give United a better chance of success next season.

Fans are eager to see progression after years of the same trend: two steps back for every one step forward.

The report claims that Solskjaer wants a more fluid system and he is leaning towards a 4-2-3-1 formation, with Paul Pogba given more attacking freedom.

Solskjaer is looking for a better relationship between his midfielders and full-backs, which could be seen for United’s opener against Leeds on Wednesday, when Pogba found Aaron Wan-Bissaka in a great position on the right flank before the new arrival assisted Mason Greenwood.

Moreover, it’s important now that Luke Shaw improves his game going forward. It would go a long way if both of our full-backs chipped in with assists next season.

The early signs are good.