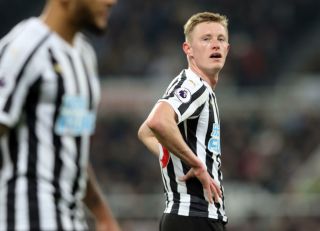 It is noted at the beginning of the segment that Newcastle don’t want to lose the 21-year-old midfield as they see Longstaff as part of their plans for the future, under new manager Steve Bruce.

A stat mentioned, which hasn’t been brought to our attention before now, is one that holds Longstaff partly accountable for an amazing feat. Newcastle won every game that he played last season at St. James’ Park.

However, to put a dint in United’s alleged interest in Longstaff, Sky Sports understand that the player is excited about working with Bruce and becoming a Newcastle regular.

Sky Sports state: “While it is thought he would be keen to talk to Manchester United – if the two clubs can agree on a fee – we are told that Longstaff is not pushing for a move.”

We’re talking a huge amount of money for someone with very little experience, so the question put to the panel was should Longstaff stay at Newcastle or make such a big jump so early in his career?

Playing first-team football in a competitive environment is key for Longstaff at the moment, so why not strike a deal now and let him stay at Newcastle until Christmas and then revaluate the situation before deciding to take them then or to let him finish the season under Bruce?