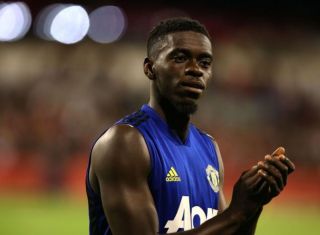 With six changes from the team that beat Leeds United 4-0 on Wednesday, Solskjaer has kept the line-up young, with summer signings Aaron Wan-Bissaka and Daniel James both in the starting XI.

But most of the positivity surrounds the inclusion of young defender Axel Tuanzebe, who could be in for a big breakthrough season after spending last season on loan down in the Championship at Aston Vila.

While getting a result would be nice, these pre-season friendlies are about the players gaining fitness and avoiding injury.

Solskjaer still needs to sign a top class centre-back but the early signs of Tuanzebe have been very promising.

Here’s what the fans on Twitter had to say about Tuanzebe starting against Inter:

Axel and Wan Bissaka in the same defence pic.twitter.com/zbCbN63Qjr

Tuanzebe Lindelof Inject that into my veins

That Defence and those lads at the front 3 is the future. Replace Matic with Mctominay. Get in Garner for Lingard and we have our playing 11.
Thoughts reds?