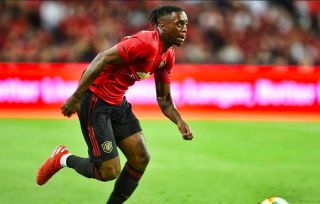 Manchester United are currently level at half-time with Inter Milan in the Singapore National Stadium.

The Reds have been on top so far, and have looked the most dangerous in front of goal.

However, undoubtedly the most impressive player again so far is new signing Aaron Wan-Bissaka.

The England u21 international is showing us just what we’ve been missing at right-back for a number of years now.

Wan-Bissaka has shown promise going forward but more impressively his defensive attributes; the Inter Milan players simply haven’t been able to find a way past the young full-back.

We now know why Wan-Bissaka is labelled ‘The Spider’ – his outstretched challenges are already becoming a trademark at the back.

The youngster is already becoming a fan favourite with United fans, who have reacted to his first-half efforts below:

Is it an attacker

Is it a defender

No, it's Wan Bissaka

Wan-Bissaka has attempted nine tackles during pre-season, with a 100% success rate.#MUTOUR pic.twitter.com/EgDqigtveJ

Wan-Bissaka is solid! Superb RB who will only get better 👌🏻#MUFC

Wan-Bissaka – knew he was class. But loving just how regularly he shows it.

Wan-Bissaka is a defensive juggernaut. 🕷 #mufc

So refreshing watching a good RB after suffering with Young for all this time. Wan-Bissaka is 🥶

It's still only pre-season but I really started to believe that this boy is one of the best RBs in the world right now. Monster.