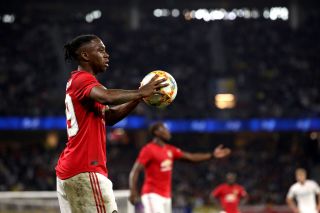 Manchester United and Inter Milan remains scoreless at half-time, but the Reds have looked the stronger side thus far.

Marcus Rashford, Paul Pogba, Daniel James, Anthony Martial and Luke Shaw all had chances but nothing clear cut or enough to claim that we deserve to be in the lead at half-time.

As for Inter, they’ve been solid defensively, however they haven’t been able to keep possession for long periods of time.

I know it’s only pre-season and we shouldn’t be getting excited until things get competitive, but how are we supposed to contain ourselves when Aaron Wan-Bissaka continues to put in performances like thus?

You can tell by how he lunges into tackles that he loves defending. Inter tried and tried but couldn’t see past the young full-back and it’s telling that Solskjaer is telling his full-backs to bomb forward.

Expect AWB to be a big influence on how we play this coming season. He is already building a formidable understanding with Paul Pogba from midfield and was the best player on the pitch in the first-half.

Lingard brings energy to the side, but lacks that edge you get from an elite playmaker

United have been the better side in the first-half, but there’s nobody in midfield to help aid Pogba when it comes to creativity. Sure, Lingard has had his moments to remember down the years, but Solskjaer needs to dip into the market and sign someone else who will cut defences open.

Could that be Bruno Fernandes?

What a defender! I wanted him before the transfer window opened and recall writing about it here, but every time I watch him play the more I want to see him in a United shirt.

He recently signed a new deal at Inter, who probably won’t let him go, but hey, if they really want Romelu Lukaku why don’t we chance our arm? They’ve got Diego Godin coming into an already strong defence.

The Slovakia international is a wall at the back and is more than comfortable with the ball at his feet. He’s more than happy to take members of the opposition for a short cut too, which is a trait I love to see in a defender.