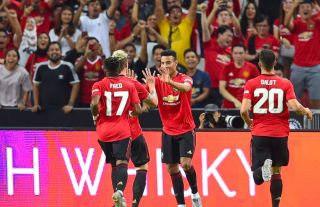 Manchester United midfielder Andreas Pereira has praised young forward Mason Greenwood after the 17-year-old scored the decisive goal in the friendly against Inter Milan in Singapore.

Greenwood showed shades of Robin Van Persie in a red shirt by showing excellent composure in the box before firing home an unstoppable shot into the left corner. It was the youngsters second goal of the tour following his strike against Leeds United in Perth on Wednesday.

Pereira came on as a substitute in the game at the Singapore National Stadium and already knows of Greenwood’s talents after coming through the youth system with him.

“He’s scoring goals, we’re very happy for him. Hopefully he can keep it up and score more goals,” Pereira told MUTV as quoted by Manchester Evening News.

“I know him from the youth. Every chance he scores.”

It certainly was a clinical finish from a player who is showing maturity beyond his years so far for the Reds.

Manager Ole Gunnar Solskjaer has a hugely talented player on his hands who is now surely being seriously considered for the club’s first game of the season against Chelsea at Old Trafford on August 11th.

Greenwood has been one of the standout players of the tour and if he is continues to be ruthless in front of goal, then he just may give Solskjaer no choice but to select him in attack in the Premier League.