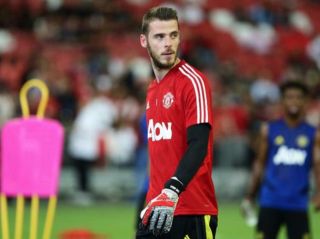 Ole Gunnar Solskjaer has named his starting line-up to face Inter Milan in the International Champions Cup and it sees goalkeeper David de Gea make his first appearance of the 2019 pre-season tour.

Luke Shaw also returns to the team after picking up a hamstring injury in the first friendly of the our, against A-League champions Leeds United.

Axel Tuanzebe will partner Victor Lindelof at centre-back, while Aaron Wan-Bissaka gets more minutes under his belt at right-back ahead of his first season at the club.

Nemanja Matic will captain the side from the middle and it looks like Solskjaer will be opting for a 4-2-3-1 formation, which is something we covering in slightly more detail this morning.

The only name left out — who starts — is Paul Pogba. Watch out for his balls to the flying full-backs.