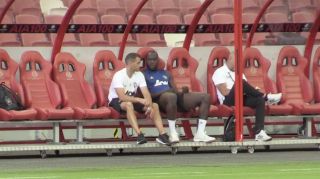 The Belgian striker has been closely linked with a transfer to Inter, with the Mirror reporting on Belgian team-mate Dries Mertens urging him to join the Serie A outfit, although we are led to believe he is has been absent from training and previous matches due to injury.

Moreover, Solskjaer has been noticeably tight-lipped on the Lukaku situation, careful enough to give short answers in response to questions aimed by the press.

Press Association reporter Simon Peach is in Singapore to cover the next leg of United’s pre-season tour and has captured a video of Lukaku sitting out the latest training session, at the National Stadium.

If our suspicions have any truth — and Lukaku is fit, just unwilling to take part in any training/matchday duties — it’s important United show him the door this summer.

He should be edging to get back on the pitch and it would be the utmost disrespect to his team-mates and fans if he’s pretending to be injured whilst trying to engineer a transfer to Saturday’s opponents Inter.