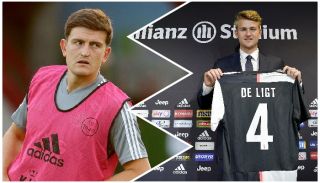 Speaking on talkSPORT, Alan Brazil has questioned why Manchester United decided not to move for Matthijs de Ligt and instead have opted to pursue Leciester City’s Harry Maguire.

Reports this summer had suggested United were one of the sides trying to sign De Ligt, but he went from edging closer to Barcelona to eventually joining Serie A champions Juventus.

Over the past month or so, talks of a move for Maguire have intensified.

Still without a breakthrough for the Foxes’ centre-back, De Ligt this week completed a £67.5m move to Juve after leaving Ajax, as reported by The Sun.

Brazil said: “Manchester United, could they not have gone in there with £68m? This is nothing to do with Harry Maguire – I like him as a player – but they are talking about £80m for Harry who is 26 and De Ligt is 20 next month but he goes for just £67.5m.”

It’s a pretty simplistic view to come out with when the club already had an agreement with Ajax over the transfer of De Ligt, as reported by The Express, but the player had other options – such as Juventus, Barcelona and Paris Saint-Germain – to consider.

There’s no doubting De Ligt would have been a more appealing signing than Maguire, and the valuations being touted for the England international don’t make a lot of sense when compared, but Leicester know United are desperate for a top defender and will squeeze every cent possible out of the deal.

De Ligt joins Juve knowing he will win domestic titles whilst competing in the Champions League each season. They’re in the process of building a team good enough to win the European Cup with the signing Cristiano Ronaldo last year, so is it realistic to presume he would have picked Manchester over Turin at this stage of his career?

We want players to sign for the right reasons – not solely for ridiculous money — and if De Ligt had second thoughts about coming to Old Trafford, which he clearly had, he’s not going to solve our problems in the long-term.

Maybe with Maguire we can build on something before aimlessly trying to attract the best players again. Solskjaer knows he has a lot of work on his hands to make United an attractive destination to the likes of De Ligt again, and playing in the Europa League is an instant turn off for the best players.

We must accept that and do something about it.