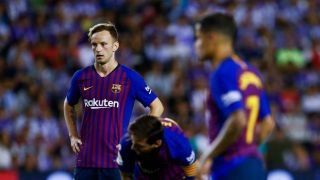 Ivan Rakitic has been linked with a move to Manchester United all summer, but Sport have reported on this alleged interest more than any other newspaper.

There has been nothing concrete in other Spanish newspapers, or even publications based in the UK.

Sport Witness have written about Sport’s coverage of United’s supposed interest in Rakitic, showing a timeline from as early as May, but surely if there was any truth in this we’d hear about it from outlets closer to home?

Rakitic is a big name in world football and his potential arrival to Old Trafford would be huge news, yet it doesn’t seem like any credible United reporter seems willing to stick their neck out and claim the same as Sport, therefore, we have our suspicions.

The latest from Sport, as translated by Sport Witness, shows the front page of the Catalan newspaper stating it’s a ‘priority’ for the La Liga champions to sell Rakitic to raise funds, even though the player wishes to stay at Camp Nou.

READ MORE: Greenwood, Pogba, Wan-Bissaka: How Man Utd could line up against Inter

Apparently his salary is too high and at 31, it sounds like they see this as the right time to move the Croatian on.

It is also claimed United have ‘openly shown their interest’ in the former Sevilla man, but surely that would get back to hacks working for the outlets we read on a daily basis?

Rakitic has two years remaining on his contract at Camp Nou, and while he’d make a positive difference at Old Trafford it doesn’t seem wise to build up any excitement about an imminent arrival.

United are being strongly linked with moves for Sporting Lisbon ace Bruno Fernandes and Newcastle youngster Sean Longstaff. Unless they are being used as smokescreens, which I doubt for Fernandes, the pursuit of Rakitic seems a bit far-fetched.