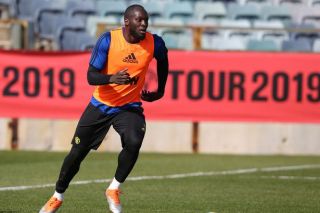 The Manchester United manager said the striker would not be fit enough to take on Inter Milan in Singapore on Saturday.

Lukaku has yet to play a minute on the tour which is far from ideal ahead of a new season.

But questions were also asked if there was an update on where Lukaku will be next season.

Solskjaer basically refused to comment, remaining tight-lipped, by saying he has had no update on that front.

He was quoted by MEN, as saying: “I don’t have any updates form the last time.”

There will be plenty of talk over the coming days since United are taking on Inter, the club closely linked with signing Lukaku.

It is understood Lukaku wants to leave Old Trafford because he has fallen down the pecking order, with Solskjaer preferring Marcus Rashford as his central piece in attack.

Last season, Lukaku played several times on the right but perhaps he wants a move now to be recognised as the main centre-forward again elsewhere.

A potential exit for Lukaku could offer young Mason Greenwood more opportunities in the first-team next season.