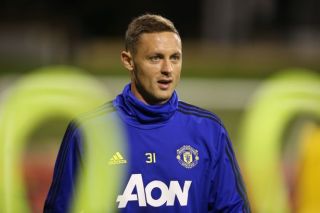 Nemanja Matic is anticipating a new role at Manchester United following the departure of Ander Herrera this summer.

The Basque midfielder left the club at the end of the season after his contract expired and has since joined French champions Paris Saint-Germain.

As a result, Matic, who only joined United two years ago, is now considered one of few seniors in the squad.

Manager Ole Gunnar Solskjaer has added two young players to his squad this summer – Daniel James of Swansea City and Aaron Wan-Bissaka of Crystal Palace – and it looks like he will also bring through more players from the academy.

Matic believes he can be a positive influence on the young contingent at United, and he already knows what it means to win trophies, which will go a long way towards blooding the right players for the Red Devils.

“Yeah my position is very important to talk to the team-mates especially me as one of the more experienced players and I’m trying to do that exactly,” Matic said, as per Manchester Evening News.

“I think this pre-season we are training very well, every one of us is trying to give something extra and me also so I’m sure this season we will play much better, if that is going to be enough to win some trophies I don’t know, it’s difficult to say now, but I’m quite sure we’ll play much better.”

Solskjaer knows it will take a lot of hard work and rebuilding to bring trophies back to Old Trafford.

But unless the Glazers start spending like owners that want to be winning league titles and the Champions League again, his hands are unfortunately tied.

We need leaders and hopefully Matic can start being one.

He added: “Last season I had some problems with injuries but I was no happy with my form, we finished sixth and I was no happy but this season I start with the team and we will see. At the moment I feel great and will continue to train hard to help the team.”

Matic looked like a player who was past his best last season. He never had bundles of pace, but in terms of mobility he appeared like a baby elephant.

Fingers crossed it’s not just a better season for United in general but Matic too, especially in front of that defence.